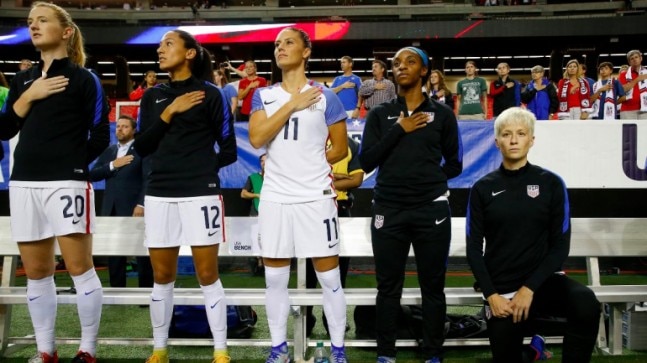 Kneeling has become a symbol of the fight against police brutality used by protesters who have flooded the streets of U.S. cities in the wake of George Floyd.

U.S. women’s football team star Megan Rapinoe took a knee during the playing of the anthem prior to a match in 2016 (AP Photo)

The United States Soccer Federation (USSF) will hold a special meeting on Tuesday to consider repealing a policy requiring national team players to stand during the national anthem.

The USSF told Reuters in an email that a vote could come following Tuesday’s conference call or on Friday at the quarterly executive board meeting.

The USSF passed a rule in 2017 that requires players and team personnel to “stand respectfully during the playing of national anthems at any event in which the Federation is represented”.

The policy was put in place after U.S. women’s national team member Megan Rapinoe took a knee during the playing of the anthem prior to a match against Thailand in 2016.

Colin Kaepernick popularised the gesture of kneeling during pre-game renditions of “The Star-Spangled Banner” in 2016 while a member of the National Football League’s (NFL) San Francisco 49ers.

The move by the USSF to reconsider its position comes after NFL commissioner Roger Goodell said last week that the league made a mistake not listening to players and encouraged them to speak out against racism and peacefully protest.

Kneeling has become a symbol of the fight against police brutality used by protesters who have flooded the streets of U.S. cities in the wake of the death of black man George Floyd in police custody in Minneapolis last month.

Floyd was killed on May 25 after a while male police officer kneeled on his neck for nearly 9 minutes. The incident has once again given rise to the Black Lives Matter movement across the world.

Soccer teams in popular leagues across Europe, such as the Premier League and Bundesliga, have been kneeling at the centre circle before their matches to protest against racism ever since the sport resumed amid the coronavirus pandemic.

Liverpool was the first high-profile team to express solidarity with the protesters and show their stand against racism by taking a knee around the Anfield centre-circle to join in the Black Lives Matter movement.

Bundesliga teams Borussia Dortmund and Hertha Berlin also joined the protests by doing the same before their league match in an empty Signal Iduna Park stadium in Dortmund.

In fact, the German Football Association (DFB) ruled last week that players were free to show their support for protests over the death of Floyd.