Trump: US may rethink decision to exit surveillance treaty 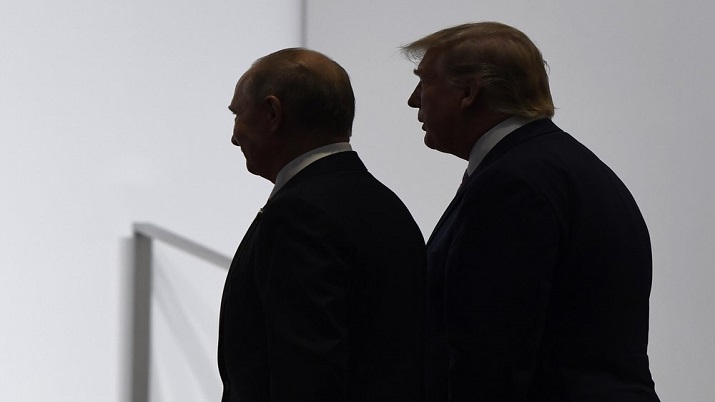 President Donald Trump said Thursday that Russian violations make it untenable for the U.S. to stay in a treaty that permits 30-plus nations to conduct observation flights over each other’s territory, but he hinted it’s possible the U.S. will reconsider the decision to withdraw. Trump’s announcement comes as the U.S. begins new nuclear arms control talks with the Kremlin aimed at replacing an expiring weapons treaty with a modern and potentially three-way accord that brings China into the fold. Senior administration officials say Trump’s willingness to leave the Open Skies Treaty is evidence of how prominently arms control verification and compliance will feature in the new talks.

The Open Skies Treaty that governs the unarmed overflights was initially set up to promote trust and avert conflict between the U.S. and Russia. The Trump administration informed other members of the treaty that the U.S. plans to pull out in six months — which is after the presidential election — because Russia is violating the pact. The White House also says that imagery collected during the flights can be obtained quickly at less cost from U.S. or commercial satellites.

“Russia didn’t adhere to the treaty. So until they adhere, we will pull out, but there’s a very good chance we’ll make a new agreement or do something to put that agreement back together,” Trump told reporters at the White House before leaving for Michigan.

“So I think what’s going to happen is we’re going to pull out and they (the Russians) are going to come back and want to make a deal,” Trump said. He added: “I think something very positive will work.”

The U.S. announcement that it plans to leave the treaty is expected to upset some members of Congress and European allies, which benefit from the imagery collected by Open Skies flights conducted by the U.S.

“Ending such agreements without anything to replace them could result in destabilizing activities such as a dangerous new arms race leading to possible miscalculations,” said U.N. spokesman Stephane Dujarric.

“Our position is absolutely clear and is invariable: The withdrawal of the US from this treaty will come as yet another blow to the system of military security in Europe, which is already weakened by the previous moves by the administration,” Grushko told state news agency Tass.

Trump’s national security adviser Robert O’Brien said the president has made clear that the United States will not remain a party to international agreements being violated by the other parties and that are no longer in America’s interests. He noted that Russian violations are also what prompted Trump last year to pull out of a 1987 nuclear arms treaty with Russia.

That treaty, signed by President Ronald Reagan and Soviet leader Mikhail Gorbachev, banned production, testing and deployment of intermediate-range land-based cruise and ballistic missiles with a range of 500 to 5,500 kilometers (310 to 3,410 miles).

New START Treaty, which expires in February shortly after the next presidential inauguration, now is the only remaining treaty constraining the U.S. and Russian nuclear arsenals. It imposes limits on the number of U.S. and Russian long-range nuclear warheads and launchers. Russia has offered to extend the treaty, but Trump is holding out in hopes of negotiating a three-way agreement with Russia and China.

“It is our expectation that Russia will help us to bring China to the negotiating table,” Marshall Billingslea, special presidential envoy for arms control, said Thursday during an online event hosted by the Hudson Institute think tank. He said he began talks a few days ago with his Russian counterpart and that negotiations will take place, as soon as possible given the COVID-19 pandemic, in a yet-to-be announced venue in Europe.

President Dwight Eisenhower first proposed the United States and the former Soviet Union allow aerial reconnaissance flights over each other’s territory in July 1955. At first, Moscow rejected the idea, but President George H.W. Bush revived it in May 1989, and the treaty entered into force in January 2002. Thirty-four nations have signed it; Kyrgyzstan has signed but not ratified it.

More than 1,500 flights have been conducted under the treaty, aimed at fostering transparency about military activity and helping monitor arms control and other agreements. Each nation in the treaty agrees to make all its territory available for surveillance flights and share all the imagery collected, yet Russia has restricted flights over certain areas.

“I absolutely cannot see a single upside to abandoning this treaty against the advice and wishes of our allies, other than for the people who never liked this treaty and don’t like the idea of the transparency and openness the treaty provides,” Bell said.

The U.S. has been working on a proposal to share with partners and allies imagery the U.S. would have shared from its Open Skies flights, said senior administration officials, who spoke on condition of anonymity to explain Trump’s decision.

Last month, top Democrats on the Foreign Affairs and Armed Services committees in the House and the Senate wrote to Trump accusing him of “ramming” a withdrawal from the treaty as the world grapples with COVID-19.

This month, 16 former senior European military and defense officials signed a statement supporting the treaty, saying a U.S. withdrawal would be a blow to global security and further undermine the international arms control agreements.

If the U.S. and Russia exit, all U.S. and Russian territory would be off limits to the overflights. That prompts arms control experts like Steve Pifer at the Brookings Institution to ask “What would be the point?’” On the other hand, he said, Moscow could opt to stay in the treaty, which would at least allow it to continue overflights of American facilities in Europe.

Senior administration officials said Russian violations include restricting flights over Moscow and Chechnya and near Abkhazia and South Ossetia. Russian restrictions also make it difficult to conduct observations in Kaliningrad, a Russian exclave sandwiched between Lithuania and Poland that is home to Russia’s Baltic fleet, they said.

Russia uses illegal overflight restrictions along the Georgian border in support of its propaganda narrative that the Russian-occupied enclaves of Georgia are independent countries. Moreover, the senior administration officials said Russia is using Open Skies flights to gather information on critical civilian infrastructure in both the U.S. and Europe, but declined to offer additional details.