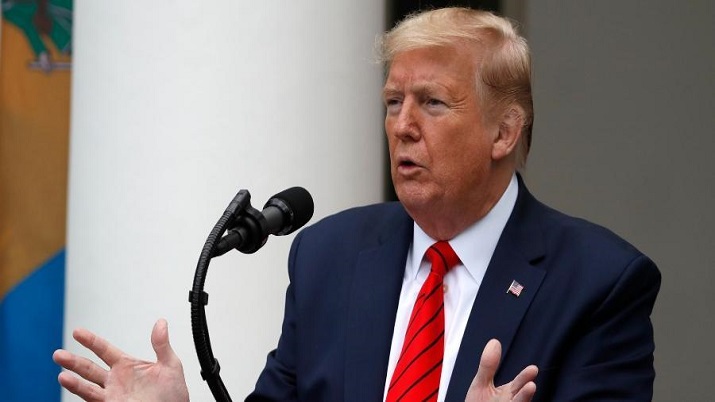 US President Donald Trump is “feeling absolutely great” after taking a two-week dose of antimalarial drug hydroxychloroquine and would take it again if he feels he is exposed to the coronavirus, a top White House official has said. Hydroxychloroquine sulfate was first synthesised in 1946 and is in a class of medications historically used to treat and prevent malaria. It is approved by the US Food and Drug Administration to treat malaria, rheumatoid arthritis, lupus, childhood arthritis, and other autoimmune diseases.

The drug is not FDA-approved for the treatment of COVID-19 but it has been identified as a possible treatment for the infection and the US government has requested its immediate availability.

Trump has called hydroxychloroquine a “game-changer” drug in the fight against the coronavirus.

“I went to him just before coming out here and I asked him that. And he said, ‘he’s feeling perfect’, he is ‘feeling absolutely great’ after taking this regimen. And, he would take it again if he thought that he was exposed,” White House Press Secretary Kayleigh McEnaney said on Thursday when asked how the US president was feeling after taking the antimalarial drug.

Many experts have underscored the prophylaxis use of hydroxychloroquine. One such paper by Tina Hesman Saey author at ScienceNews.org talks about nearly 200 clinical trials around the world, including 28 involving healthcare workers, she said.

In fact, at Henry Ford Hospital in Michigan, 3,000 healthcare workers are taking it as part of a trial. And there’s some really excellent information there about the use of prophylaxis for this,” the press secretary said.

Responding to questions, McEnany said that a number of doctors and researchers have been coming out in support of hydroxychloroquine.

“It’s not specific to the President, these doctors. But they just talk in general about what they’ve seen. For instance, Sarah Lofgren, an infectious disease doctor at the University of Minnesota Medical School in Minneapolis – they’re testing hydroxychloroquine there to prevent COVID-19. And she said, ‘When used alone, we’re not seeing major issues. Out of the thousands of patients, we’re not seeing things that some people are concerned about’,” she said.

McEnany also said that it was always important to get a prescription from doctor if one wished to take hydroxychloroquine.

“Doctors are the ones that need to be prescribing this,” she said.

“But that being said, I think that some of the hyperbole around this drug that has been on the market for 65 years – been approved for use in three other maladies and has been approved for off-label use – when there’s a lot of hyperbole about this being unsafe – some of the things I’ve seen reported out there – are consequences, deterring people from being recruited into actual clinical trials,” McEnany said.

“I have some quotes from a New York epidemiologist and others conducting trials, saying they’re having trouble recruiting people because some of the myths that are out there. So it’s important to note that this drug has been safely used by millions of people for a long time,” she said in response to a question.

After Trump announced early this month that he was taking hydroxychloroquine as a preventive measure against coronavirus, a number of Indian-American doctors have written to the Trump Campaign about the usefulness of this antimalaria drug in the fight against COVID-19.

Some of them even said that they had been taking the drug.

“Hydroxychloroquine is a very safe drug used by millions all over the world over several decades,” American Association of Physicians of Indian Origin (AAPI) president Dr Suresh Reddy said in a recent letter to Al Mason, co-chair of the Trump Victory Indian American Finance Committee.

“On a personal note, several of my friends including me, have been taking Hydroxychloroquine,” Reddy said.

In a statement, Mason said Trump had taken unprecedented steps to respond to the coronavirus crisis.

“He took swift action to shut down travel from where the virus originated – China,” he added.

Observing that the unprecedented global pandemic is testing every world leader, he said that nations were judging their leaders on a daily basis.

“A pandemic was never a subject for any world leader to have to have a mastery over, yet Trump has a handle now on every facet related to the coronavirus,” Mason said.

After Trump”s repeated touting of hydroxychloroquine as a “game changer” cure for the virus, the FDA issued an advisory warning that the drug has not been “shown to be safe and effective for treating or preventing COVID-19.”

The Trump Administration has bought millions of doses of hydroxychloroquine and stockpiled it.

India, which is one of the major manufactures of the drug, has sent several millions of doses to the US as part of its humanitarian gesture.