There will be a lot of give and take: Aaron Finch on scheduling after cricket’s return 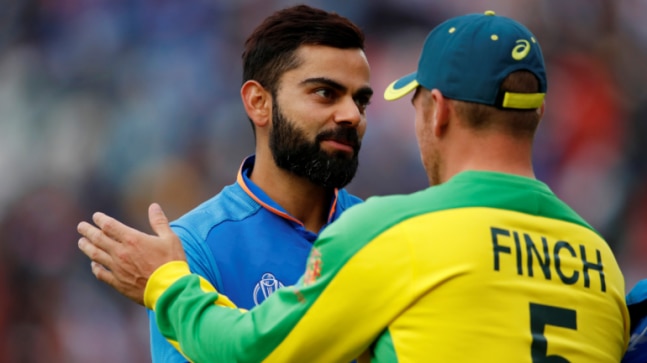 Australia’s limited-overs captain Aaron Finch said cricket boards and stakeholders in the sport will be taking ‘big efforts’, which will include a lot of compromises, in order to get cricket thriving again post the Covid-19 crisis.

With several series already postponed due to the Covid-19 pandemic, the International Cricket Council (ICC) has a big task on its hand when it comes to scheduling when the sport resumes. There are doubts over T20 World Cup going ahead as scheduled in October-November in Australia.

Former Australia cricketers Ian Chappell and Allan Border have already spoken out against the possibility of Indian Premier League (IPL) being held in the T20 World Cup’s window later this year.

Notably, the IPL has been suspended until further notice due to the pandemic. The cash-rich T20 league has missed the April-May window this year.

Chappell and Border reacted to reports in the Australian media that the Board of Control for Cricket in India (BCCI) will push for IPL during the T20 World Cup window. The reports come at a time when contingency plans for the 16-team T20 World Cup are on the agenda at next week’s ICC board meeting.

Stressing that it’s going to important for cricket boards to work together once the sport resumes, Aaron Finch said India’s chances of touring Australia as scheduled for T20I and Test series this year are looking bright.

“It will get to a point, not just for IPL but for all cricket, there’ll be a compromise from a lot of different stakeholders – organisations, countries, players, the ICC – to get cricket back and countries thriving again,” Finch was quoted as saying by The Sydney Morning Herald.

“I think the ICC are meeting next week to start discussing the FTP [Future Tours Program] again. The next couple of weeks we’ll have more idea what that looks like, what compromises will be made for different tournaments and countries.

“Everyone working together to get the best result for everyone.

“Some situations where it’s not ideal for Australia we have to compromise and give. It will be one big effort, I think.

“With India coming out here this summer, Kevin [CA CEO Roberts] said it was a nine out of 10. I think there will be give and take in a lot of different things like that.”

‘BCCI would not suggest anything’

However, BCCI treasurer Arun Dhumal said India will not push for the postponement of T20 World Cup and the tournament can go ahead if the Australian government is confident of hosting it.

“Why should the BCCI suggest postponing the Twenty20 World Cup?” Dhumal told Reuters.

“We’ll discuss it in the meeting and whatever is appropriate, (the ICC) will take a call.

“If the Australian government announces that the tournament will happen and Cricket Australia is confident they can handle it, it will be their call. BCCI would not suggest anything.”

Meanwhile, Aaron Finch said he will more than willing to tour England if all the safety protocols are followed. Australia were scheduled to play 3 ODIs and as many T20Is in July in England but the tour has been thrown into doubt due to the pandemic.

“I’d be super excited to get any cricket back – if it’s international cricket all the better,” Finch said.

“If it’s done really well with the quarantine bubble and regular testing I don’t see it being an issue. I’d be keen to get back playing as soon as possible.”