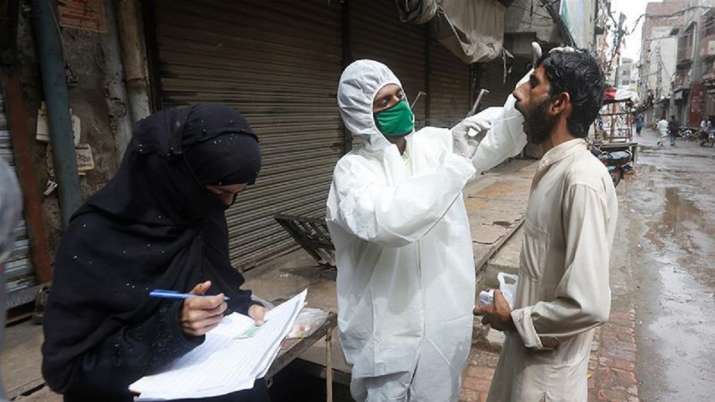 Pakistan’s coronavirus cases crossed the 100,000-mark on Sunday, as Prime Minister Imran Khan ruled out the return to a strict shutdown to stem the spread of the disease and said the “elitist” idea would collapse the economy and increase poverty.

The number of confirmed COVID-19 cases in Pakistan rose to 101,173 on Sunday after new infections were reported, making it the 16th country to cross 100,000-mark.

The Health Ministry said that on the positive side, at least 33,465 patients have fully recovered so far.

The spokesperson shared that the Akhtar was in home isolation and had gotten himself tested after showing symptoms of the virus. Akhtar was elected from Punjab Assembly’s Faisalabad III in the 2018 elections.

At least four lawmakers, including a provincial minister, have died due to coronavirus in Pakistan.

Meanwhile, Khyber Pakhtunkhwa province has made wearing face masks mandatory in public hospitals across the province.

“Due to the outbreak of Covid-19, it is notified in the best public interest that no person should be allowed to enter any government hospital without wearing a face mask,” according to a notification.

The province reported 486 new coronavirus cases, taking the provincial tally to 13,487, according to the health department.

The province’s death toll from the virus rose to 575 with 14 more deaths reported — seven in Peshawar, two in Bajaur and one each in Nowshera, Mardan, Dir Lower, Malakand, Kohat.

Of the 38,108 confirmed cases of the novel coronavirus in Sindh, 30,548, a whopping 80 per cent, have been reported from the metropolis, according to data released by the provincial health department.

Minister for Planning, Development and Special Initiatives Asad Umar said on Sunday that the federal government distributed 250 ventilators among the provinces in the last week.

Umar also announced that the National Command and Operations Centre (NCOC) has, in collaboration with the National Information Technology Board, launched an updated version of the government’s COVID-19 app.

“An updated version of the COVID-19 app will allow users to see the availability of beds/vents & capacity/usage in real-time at various health centres across Pakistan,” he said.

Amid the spike in coronavirus cases, Prime Minister Khan on Saturday called for creating awareness among the masses regarding the severity of the coronavirus pandemic and the need for strict observance of the standard operating procedures (SOPs), the Express Tribune reported.

Khan again ruled out the return to a strict lockdown to stem the spread of coronavirus, stressing that the “elitist” idea would cause the economy to collapse and increase poverty. Instead, he insisted on a “smart lockdown” with strict adherence to the SOPs.

“And some of our elite, wanting a lockdown – the elite who have the privilege of spacious homes and income unaffected by the fallout of lockdown,” he said in a series of tweets.

“A lockdown means the collapse of the economy and in poorer countries a steep rise in poverty, crushing the poor as happened in Modi’s lockdown in India,” the prime minister added.

“The only solution as the world has discovered is smart lockdown which allows for economic activity with SOPs. We are amongst the pioneers of this approach. I appeal to civil society, media, Ulema and our tiger force to create awareness amongst the public of Covid-19’s severity and the need to strictly observe SOPs,” he tweeted.

Earlier this week, the prime minister ordered the reopening of more sectors of the economy as part of easing the lockdown in order to save people’s livelihood, particularly the daily-wage workers. However, since then there is a spurt in new cases.