Looking forward to next one: Kane Williamson as Virat Kohli shares picture of India’s last overseas tour before lockdown 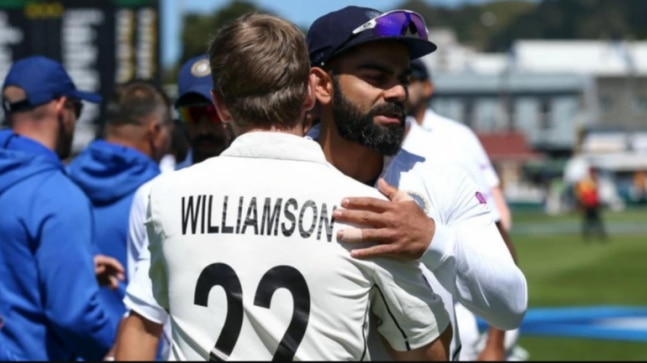 Kane Williamson reacted To Virat Kohli’s social media post after the India skipper turned nostalgic in the time when cricketing activities have been suspended due to the coronavirus crisis.

After Virat Kohli shared a throwback picture with “good man” Kane Williamson from India’s tour of New Zealand, his Kiwi counterpart reacted to the post, saying he is looking forward to the series between the two sides.

India skipper Virat Kohli on Friday turned nostalgic in the time when cricketing activities have been suspended due to the coronavirus crisis. Kohli shared a picture on his social media handles with Kane Williamson and captioned it, “love our chats. Goo man.”

Williamson did not miss out on replying to the picture as he wrote he was trying to figure out who is taller among the two of them.

Earlier this year, India had a 2-month long tour of New Zealand where they won the T20I series 5-0 and lost ODI series 0-3 and the Test series 0-2.

In one of the matches, Virat Kohli and Kane Williamson were seen having a good time when the two skippers did not play the 5th T20I. Kohli and Williamson were caught sitting at the boundary line and enjoying their conversation.

Opening up on their conversation on the sidelines of that game, Kohli said, “Kane and I have similar mindsets, similar philosophies. It is amazing that despite being from different parts of the world, we have similar thinking and we speak the same language.”

However, it was on the same tour when Kohli gave a pumped up send-off to Kane Williamson after Jasprit Bumrah got the better of New Zealand skipper, removing him for just 3 in the 2nd Test of the 2-match series.