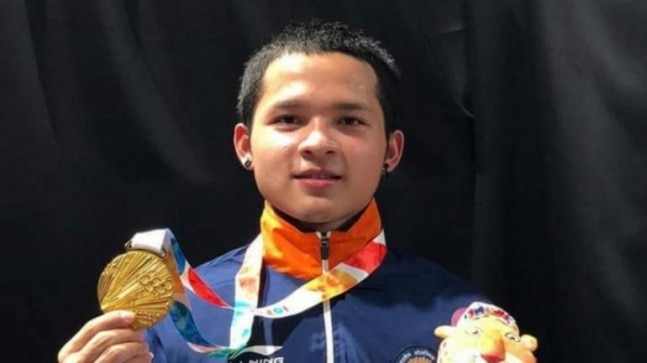 Indian weightlifter Jeremy Lalrinnunga’s typical day at the NIS, Patiala consists of two-time training inside his room, occasional gaming and speaking to family on video call.

The nationwide lockdown has been detrimental for athletes as they now face a race against time to regain competitive touch, especially the ones in running for the Tokyo Olympics.

Jeremy is among a select few in pole position to represent India at the Games next year. And in due time, will clinch the qualifying berth when competition resumes. Not lifting weights is a concern as he is losing muscle mass but all that will be recovered within a month’s training, according to the 17-year-old.

“It does have a bit of an impact, I can feel it in my body,” Jeremy told Mail Today.

Jeremy shot to fame in 2018 when he clinched gold medal at the Youth Olympics in Buenos Aires. Since then, he has shifted to 67kg category from his usual 62kg and also clinched his first senior national crown earlier this year.

At the 2019 Asian Championships, he broke 15 records including three world youth and three senior national numbers.

“It’s been more three months of being locked down in the room. It do get worked up being alone but the habit of being away from family, focussing solely on weightlifting, has somehow kept me going.

“I generally work on my strengthening and core, which is crucial for lifters if they are not lifting weights. I believe in a month, I can regain all muscle mass and strength. I will be competition ready then.

“As far my routine is concerned, it does get a bit boring. I strictly follow training and meal, don’t skip either, but I keep myself busy by playing video games on my laptop, like Call of Duty, or GTA 5. I sometimes play PUBG on phone with friends while I keep my evenings for chat with the family,” he said.

The Olympic postponement hasn’t come as a shocker for Jeremy. His fast-tracked career from the Youth Games in 2018 to senior contention has motivated him to bid for Tokyo. However, he believes being at a tender age, time is on his side.

“The Olympic postponement might have been disastrous for many athletes. They had worked for it for many years. For me, I don’t worry about it much.

“Youth Olympics was my dream start, and I marched on with success in the senior category. It was coach Vijay (Sharma) sir who told me I should be serious about competing in Tokyo, and I started working on it since last year. Now with a year extension, I have more time to prepare,” he explained.

With the Sports Authority of India now granting permission for athletes in Patiala and Bengaluru to resume training under strict guidelines, Jeremy feels it will be crucial to take things easily. Being reckless in terms of training or health hazards, owing to the COVID-19 pandemic, is something athletes can’t afford.

“When we train in rooms, we follow instructions from coach as well as our physio as it is important to not get injured. I’m glad that we can resume training outside soon but have to be careful.

“The ongoing situation has put the world under lockdown. We can’t even think about heading home right now. So we have to be careful when we approach outdoor training. It will be good for us as we will be able to regain momentum,” he concluded.