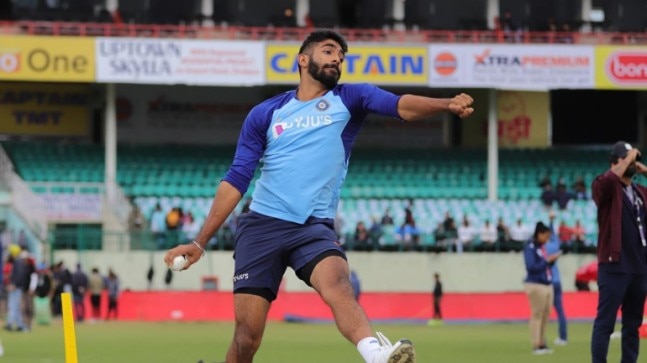 West Indies fast bowling legend Ian Bishop said Jasprit Bumrah has helped break his notion of a typical fast bowler, saying he is amazed to see the India pacer generate so much pace from a short run-up.

Ian Bishop heaped rich praise on Jasprit Bumrah, saying the India fast bowler is a ‘generational talent’ and that he is impressed with the way he talks about the game.

Jasprit Bumrah has risen to become one of the leading fast bowlers across all formats of the game. The World No. 2 in ODI rankings was considered a limited-overs specialist until he made his Test debut in South Africa in 2018. In just 14 Tests, Bumrah has taken 68 wickets at a staggering average of 20.33.

Not just the pace, Bumrah’s control and ability to get the ball moving both ways has caused a lot of problems. The Mumbai Indians pacer was in top form when India decimated the West Indies with pace at their own backyard last year.

“I grew up on the history of the game and coming through, I had this whole concept of a fast bowler as someone with a long flowing run; someone like Wes Hall, Sir Richard Hadlee, Denniss Lillee, the Marshalls, the Holdings, so on and so forth. And Jasprit is exactly the opposite: it is a stuttering, short run,” Bishop told Cricbuzz.

“Until today, I’m amazed as to where the pace comes from. And he has got a serious skill set.

“The way he swung the ball in the Caribbean, for example, and the way he can up his pace and still apply control to it.

“And then when I hear him speak about the game and break the game down, there I see a generational talent. Once he can stay fit, he is an entire package.”

Meanwhile, fast-bowling great Michael Holding had also praised Jasprit Bumrah for the impact that he has had on the game said he is concerned about the effort the India pacer is putting in due to his unorthodox action.

“Bumrah hits the deck hard and that creates more problems. And especially with that short run, it is difficult for batsmen to formulate in their minds the pace at which that ball is coming,” Holding had said on the ‘Sony Ten Pit Stop’.

“My problem with Bumrah and I mentioned it to him, when last time I saw him in England, is how long that body will hold up with that short run and the amount of effort he has to put into in his bowling, it is a human body. It is not a machine.”