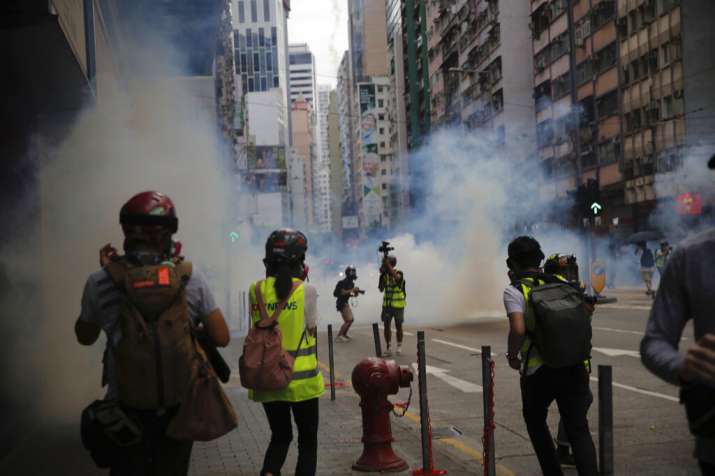 Police fired multiple rounds of tears gas and attested some 180 people as thousands took to the streets of Hong Kong to protest against China’s planned national security law for the city, it was reported on Monday.

During the Sunday clashes, police raised blue flags warning protesters converging outside a department store to disperse before tear gas was first fired near the junction of Hennessy Road and Percival Street, reports the South China Morning Post newspaper.

There were also displays of American flags, while others could be heard cursing at riot police, with some yelling, “Hong Kong independence. The only way”.

Police fired pepper balls at one group on Gloucester Road, where they later said that “rioters climbed over railings and dashed through a flyover and multiple carriageways in the vicinity, causing serious obstruction to road traffic” and “they also rampaged through passing vehicles, posing serious threat to public safety”.

In a statement, the police said that “minimum necessary force, including tear gas” had been used, as protesters had thrown umbrellas and water bottles at them.

At Canal Road, the situation grew tense as police raised a blue flag ordering the public to disperse several times, warning off reporters and district councillors with threats to use pepper spray.

The water cannon was later fired at protesters as they attempted to place barricades on the street, while more tear gas was used.

The protests took place two days after a resolution to “prevent, frustrate and punish” threats to national security in Hong Kong was presented to China’s legislature, the National People’s Congress (NPC), the SCMP reported.

The draft legislation would outlaw acts of secession, subversion and terrorism.

The resolution is expected to be passed on May 28, authorising the NPC Standing Committee, China’s top legislative body, to craft the law and impose it on Hong Kong, bypassing the city’s legislature.

In a statement on Sunday night, the Hong Kong government said it strongly condemned rioters’ illegal acts and supported the resolute enforcement actions of police.

The bill, which city leader Carrie Lam has called a top priority, provides for jail terms of up to three years.

The Legislative Council will debate the bill on Wednesday.