David Warner invites Virat Kohli to a duet on TikTok: Your wife will set you up an account Australian opener David Warner got a reply from India captain Virat Kohli after he posted a “fun Friday” post in which he can be seen copying Akshay Kumar’s viral ‘Bala’ dance move.

There was no stopping for Australia opener David Warner when he was batting before the coronavirus pandemic brought the game to a ghastly standstill and things have not changed for the pocket-sized dynamite. In cricketing terms Warner has adapted to the new situation and is an ‘artist’ now. The batsman is mastering the Indian moves in his TikTok videos.

In his latest video, David Warner can be seen acing the ‘Bala’ move of Akshay Kumar’s 2019 movie ‘Housefull 4’. Akshay Kumar was bald while doing the steps but David warner is suited up while moving his feet. Many cricketers have dropped their comments and even went on to say that he has “officially” lost it.

This time around India captain Virat Kohli has burst into laughter after watching David Warner’s antics. Kohli commented with as many as 4 laughing emojis on Warner’s ‘Bala’ post. 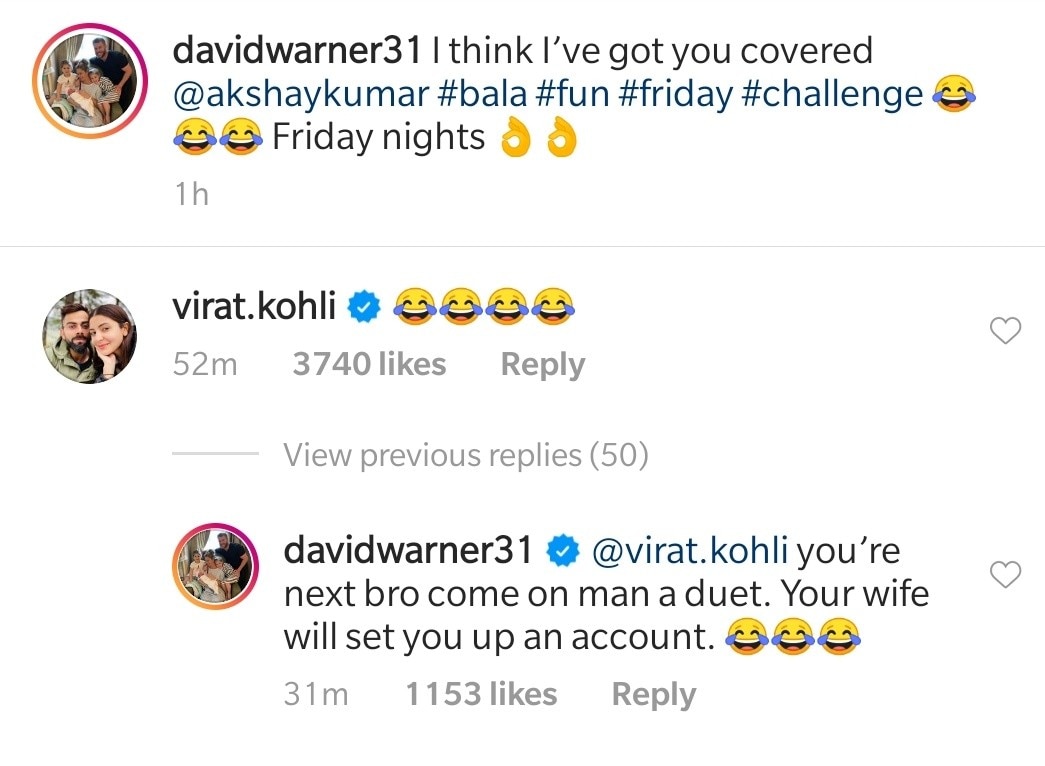 David Warner took the opportunity to invite Virat Kohli to a duet. In fact, he also suggested that Virat Kohli’s wife Anushka Sharma can set him an TikTok account. It seems like Warner wants people from his fraternity to conquer the TikTok world.

Recently, Anushka Sharma had shared an extremely funny video of the Indian captain and captioned, “I spotted …. A Dinosaur on the loose.” In the video, Virat Kohli was seen mimicking a dinosaur, he also squealed like one (if they really squealed like that).

The coronavirus lockdown has shown fans the different sides of their favourite superstars. From Yuzvendra Chahal to Irfan Patan, cricketers have been lining up to showcase their talents. Few like Rohit Sharma and Kevin Pietersen have even put professional TV presenters to same by showcasing their interviewing skills.

Their initiatives have also garnered a lot of love from their fans and strangely some feel even more closer to them because of the Instagram Live interviews or say by watching them get a haircut by their family members.

Planning for rescheduling the postponed series are on for now but till then this will be a nice way to be in touch with these cricketing giants.