Can’t think about what other players are doing: Vijay Shankar on competition with Hardik Pandya 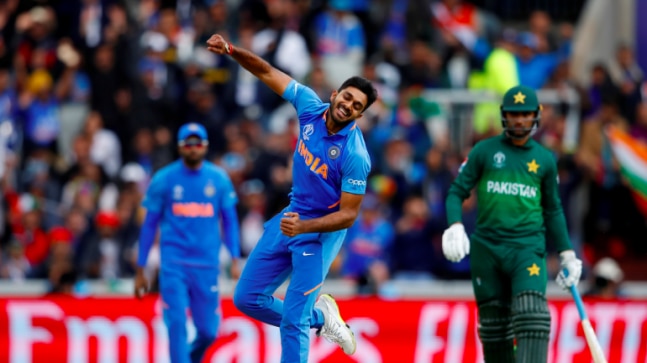 Vijay Shankar would not torment himself by thinking that it’s not he but Hardik Pandya, who is Indian team’s preferred all-rounder in the white-ball format, as the Tamil Nadu cricketer is focussed at churning out match-winning performances to stay in the mix.

The 29-year-old was part of India’s World Cup campaign but an ankle injury cut short his journey.

Since then, he hasn’t been part of the senior team with Shivam Dube coming in place of an injured Pandya. Now with a fit-again Pandya back in the mix, the wait for another national comeback could be longer.

“If it starts affecting me (that Hardik is the No 1 choice) then I will lose out on games that I have with me. If I focus on the games that I have and have match-winning performances, then my name will be there in the circuit (reckoning),” Vijay told PTI during an interview.

“If I perform, people will talk about me and if some opportunity arises, I will be getting into the Indian side. So I can’t think about what other players are doing,” said Vijay, who played 12 ODIs and 8 T20Is for India.

Vijay said that he is not looking at being a mere survivor in the Indian team but someone who can perform for long time.

“My dream is not just to get there and be a mere survivor. Only if I excel, can I prolong my international career. It’s important for us to be at our best when we go to international level.”

But for that, the man with 45 first-class games under his belt want a permanent batting position in the Tamil Nadu set-up which would give him an opportunity to score more runs.

“Over the years, if you see, I have batted in all middle-order slots and adapted to the needs of the team. However, when people ask me what my goal is, I tell them for that I need to have a fixed batting position. If I bat at Number 3 or 4, then only can I think about all these goals,” he said.

“If I am always shifting my batting position, then I will only end up getting those 30s and 40s,” he opined.

World Cup was a golden opportunity and he admitted that Afghanistan game ended up being a missed chance.

“I missed out on two opportunities and one was against Afghanistan (he scored 29). Against West Indies, I got a good delivery. Before that I had successive 40 plus scores against New Zealand in a tough game and against Australia. Had I converted even one start into a big knock, it would have been a different story,” he rued.

Vijay has an astro-turf wicket on the rooftop of his residence but during lockdown, he didn’t hit the nets.

“Usually, I call two or three people who come and bowl or give throwdowns. Due to the lockdown, I wasn’t able to call anyone so just did my exercises. Hope I can now start training.”

A lesser known fact about Vijay is his patronage for Tamil Nadu’s physically challenged cricket team, where most of the players are daily wage earners suffering due to the lockdown.

“I have been the players for the last three years, and this time during lockdown, I helped them with some money so that they don’t go hungry.