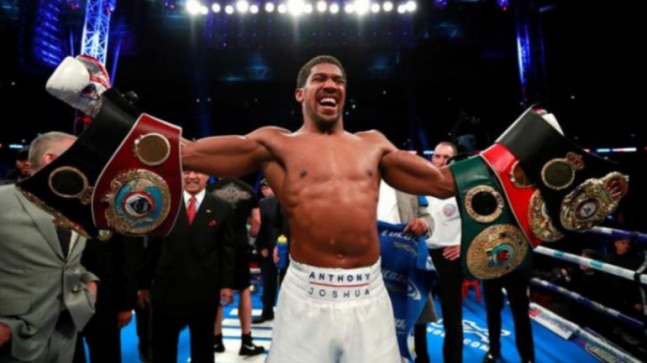 Parts of Anthony Joshua’s speech were posted on social media and the boxer was slammed for saying, “Show them where it hurts. Abstain from spending your money in their shops and economies, and invest in black-owned businesses.”

Heavyweight boxing world champion Anthony Joshua, who had joined a march through the streets of his home town of Watford and addressed protesters at a Black Lives Matter march two days back, took to Twitter on Monday and blasted at crictics who called him a racist following his speech.

Joshua, one of Britain’s highest-profile sportsmen, recited a poem written by a friend during the protest march where he also described racism as pandemic.

However, excerpts of his speech were posted on social media and the boxer was slammed for saying, “Show them where it hurts. Abstain from spending your money in their shops and economies, and invest in black-owned businesses.”

Joshua soon took to Twitter to defend his speech and hit back at those who called him a racist.

“If you think I’m a racist, go f*** yourself! If you watch the full video, the speech was passed around for someone to read and I took the lead,” Joshua wrote in a post on Twitter.

“I personally spoke from the heart about the Watford community, ideas of us personally investing seven figures to create unity and opportunities and adding change to the African/Caribbean community. Shops aren’t the issue here. Before you talk s***, you better boycott racism,” he added.

Marches and protests have been held all over the world in response to the killing of unarmed black man George Floyd by a police officer in the U.S. on May 25. Four officers involved have since been charged over the death.